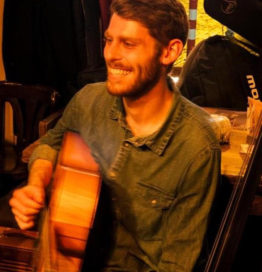 Will Dickerson’s first introduction to gypsy jazz was a fluke. He was walking to school in Montreal when he stumbled into Denis Chang jamming on the lawn of McGill University. He was so impressed that he asked Denis to teach him the style, and Denis graciously accepted him as student.
A month later, Will was playing rhythm on tour with Denis and Tcha Limberger. Will spent the next year as Denis’s homestay student and studio assistant, brushing shoulders with some of the greats including Biréli Lagrène, Angelo Debarre, and Adrien Moignard. During this time, will gigged regularly in Montreal and released an EP with his Trio, Swing Theory.

After graduating from University, Will wanted to get closer to the heart of the music, so he packed his bags and moved to Paris where he spent many late evenings jamming and forming fruitful musical connections. This one doesn’t come from Paris, but from a rooftop in Morocco. But that’s another story.

Will is passionate about sharing his musical knowledge with the community. He maintains a YouTube channel and an Instagram account where he regularly posts instructional videos. For starters you can find that treatment of Valerian Valse on Soundslice: https://www.soundslice.com/slices/1jmNc/ )

And here’s another freebie, a study of Djangology, courtesy of Will and a whole bunch of great Gypsy jazz guitarists: