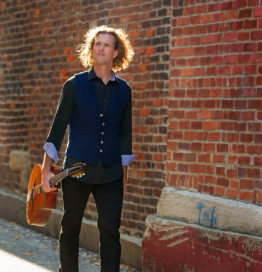 Roch Lockyer will be assisting Michael Horowitz with all things DjangoBooks this year, but the merch-fest won’t get going in earnest until late Thursday, so at least at the outset of Django Camp you’ll have a chance to work with him—first, as one of our facilitators of Tuesday’s “Meet, Greet and Play All Day”, and later offering Gypsy Picking classes during the late afternoon session. Get him before Michael does!

Loch got seriously into Gypsy jazz in 2012 and then proceeded to break both arms, with one requiring multiple surgeries and a long rehab with a very poor prognosis.  We don’t recommend following that path. But as it happens, Loch has spent much of his adult life learning about the human body—how it works, how it heals, how it thrives—primarily through the practice and teaching of yoga. Judging from his latest project, “When Frank Met Django”, it’s looking like the rehab went really, really well.

Loch has mentored with monsters, including Olivier Kikteff (Les Doigts de l”Homme) and Jimmy Bruno. In the early days of Django Camp (and throughout, informally) you’ll have the chance to get some mentoring from him. When Day is Done, you won’t regret you did: