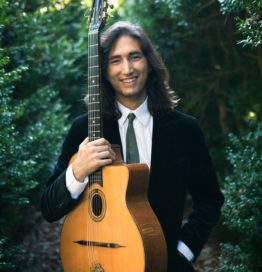 Luca Pino has been making the trek from his hometown of Long Beach, CA to Django in June for several years now and every year he shows up an even better, more seasoned player. He couldn’t get any nicer, so in that regard he hasn’t progressed at all. He first joined our teaching staff—winning rave reviews—in 2017 and we’re happy to have him back in that capacity again.

Luca started playing Django-jazz with clarinetist Kale Stiles while they were still in high school. Now they, along with Gage Hulsey, make up the core members of Hedgehog Swing. Here’s a video clip of them in action, performing “Stardust.”

Luca’s highlights from 2017 included taking the stage for the first time at Djangofest Northwest, with the Eric Vanderbilt All Stars. He also played the Walt Disney Concert hall with Postmodern Jukebox for New Years Eve, which doubled as an audition for Dancing With The Stars. I think he can take it.