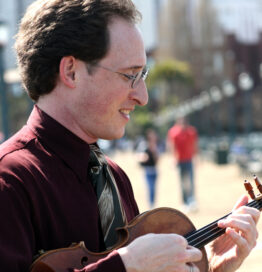 Here’s a pop quiz for Django in June lifers: last time Evan Price joined us it was the first year of “Django Camp”. (Before that, DiJ was only a weekend event.)  Name the year and the dorms we were staying in back then.

That would have been 2007, in King and Scales. If you got it right your prize is that you’ve been enjoying Django in June for a long, long time. Congratulations!

It’s strange and a little sad that it has taken so long to get Evan back. He is always on our short list of violinists who know this tradition (and others) inside and out. Best known for his work with The Turtle Island Quartet and The Hot Club of San Francisco, Evan studied violin performance and music theory at The Cleveland Institute of Music and holds a BM in violin performance from the Berklee College of Music. An accomplished player of various non-classical genres, he paid early dues as a contest fiddler, winning first place in the 18 and under division of the Canadian Old-Time Fiddle Championship, at the U.S. Scottish Fiddling Championship, and the Kentucky State Fiddling Championship.

He went on to play with many of his fiddling heroes including Stéphane Grappelli, Vassar Clements, and Johnny Gimble. After joining the TIQ in 1997, he spent ten years touring extensively in North America and Europe, recording five acclaimed CD’s with the group, two of which received GRAMMY® awards. He continues to make his name as a leading voice in gypsy jazz, primarily through his sixteen plus years of performing and recording with the Hot Club of San Francisco.

During the pandemic, necessity mothered some reinvention of Evan’s career, as it did that of so many other performing artists. One shape that reinvention took was online instruction, including videos for Denis Chang’s DC Music School. You can learn more about that and much more on Evan’s website, evanpricemusic.com. For our part, we’re happy to be welcoming him back in the flesh. It’s about time.