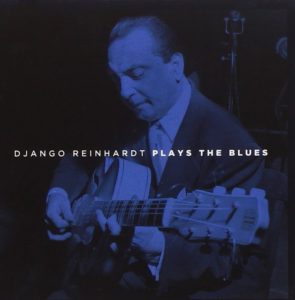 Although this is classic djam tune if there ever was one, there are a couple things that can make Django’s, “Minor Blues” (or, “Blues en Mineur”) a little tricky to jump on. Let us address those issues at the top of this page, then we’ll treat you to a number of transcriptions of various artists—on various instruments—having at it.

One thing that can make the tune a little tricky for the novice is that Django recorded it a number of times, playing the head differently each time. Here are three Django takes on “Minor Blues”:

To address this, Jack has opted to base the head we’re providing here primarily on Django’s 1947 and 1949 readings of the tune. Here you have the lead sheet he’s prepared in a variety of formats:

Which brings us to the second thing that can make this tune a little tricky for mere mortals to learn: those really fast triplets that make up part of the melody. To address that Jack has prepared a simplified melody, which again we offer below in three formats. Don’t give up on learning the “real” head to the tune; but we hope this version makes it easier for you to get in the game while you are building speed.

And here you have a collection of solos and etudes from various performers on a variety of instruments. We hope you find something here that suits you just right…

The video below is of one of this year’s featured guest artists, Serge Krief, in performance at the Samois festival way back in 1990. He takes a long solo on Minor Blues. Nathan Royal has kindly and ably transcribed three choruses from that solo for us. The times provided in the pdf below (at the beginning of each transcribed chorus) correspond more or less to the time within the video below.

Tim Kliphuis suggested we transcribe Stephane Grappelli’s solo on the 1949 recording of the tune for you. (You can find that among the recordings for which we’ve provided links toward the top of this page.)  My friend, the very talented violinist Chris Devine kindly gave it a go. Now it’s your turn:

The clarinetist on Django’s 1947 recording of “Blues en Mineur”—to which, again, we’ve linked you toward the top of this page—is Gérard Lévéque.  He takes two choruses, both of which are included in this transcription, courtesy of Jack Soref (with an assist from Susanne Ortner):

Mandolinists, of course, can work on any of the material included above. But Dave Gross took it upon himself to prepare an accessible mando solo over the changes to this tune. Here you have it in both written form and in video: