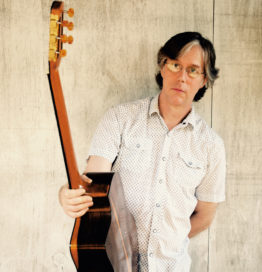 I just checked our database and the earliest record we have of Luke Hendon attending this event is 2008. But then, our records only go back to 2007, so I may be missing something even earlier! He made his first appearance on our teaching staff ten years later, in 2017, and we’re happy to have him back for this, our 15th anniversary. Here’s his story in his own words:

I learned a lot about Gypsy jazz at Django in June and like a lot of people that have been going as long as I have, I now play it professionally. I’ve been a professional musician my whole adult life, playing funk music for droves of dancing crowds, touring and playing in various styles and situations. Some of my past highlights are hanging out with Sun Ra’s band on our tour bus, opening for Al Green and performing in an Angel costume with an enormous cowboy hat on! Nowadays, I have to play a few Django Reinhardt solos before I do anything else. It’s kind of like yoga for me.

I’ve been addicted to Django Reinhardt music and the Selmer style guitars for a while now and it’s been a wonderful journey. My last album in the style, Silk & Steel was very well received. I am gigging with my own group as well as with many other groups (including Mandology, featured below) and I am constantly learning more about music. I’ve had the opportunity to play with some of the best players in the world and meet a lot of really great people in the Django community.  At Django in June and on my own I’ve studied with many of the best gypsy jazz guitarists. I try to incorporate all that I’ve learned into my teaching.